The third one’s the charm.

The same thought entered both of our minds simultaneously as we stood side by side this third time overlooking the crooked bend of the Fort George River just behind the main house of Kingsley Plantation.

Our thirteen students scattered around the National Park each in his/her own way attempting to take in this hallowed space with its dizzying, checkered, and complex history. The European colonial big house at the river’s edge, a structure that you don’t see before first confronting the white crescent of West-African styled tabby slave dwellings at the plantation’s entrance. The indelible imprint of Africa, for me, is the unshakable enigma of Kingsley.

In an instant, Dr. Jay Lutz and I looked at each other, and we both said the words, “three times,” loud enough to be heard by the other, and with no prompting. We smiled solemnly. We smiled because we knew without saying outright that our “three-times” affirmation was much more than simple confirmation that we had twice before over the past decade made this pilgrimage with our “French and Spanish Crossroads in Africa” course (FRE/SPN 406).

We make the epic and arduous six-hour road trip from Oglethorpe in order to see and to explore with our students the real life (and relatively proximate) site of intersection between African, Spanish, and French culture beyond the pages of Ndongo’s Shadows of your Black Memory or Diome’s Belly of the Atlantic, the mainstay texts of the service learning-designated literature course that we co-designed and have been co-teaching for well over 10 years.

More meaningfully, our mutual “three-times” affirmation also meant that it took three times returning to the area in order to adequately line up the pertinent pieces and personages, to get the story comfortably straight in our heads. Indeed, the story contains much to wrap one’s head around. Admittedly, this brief travel reflection will fall short of giving the story the detail that it deserves. 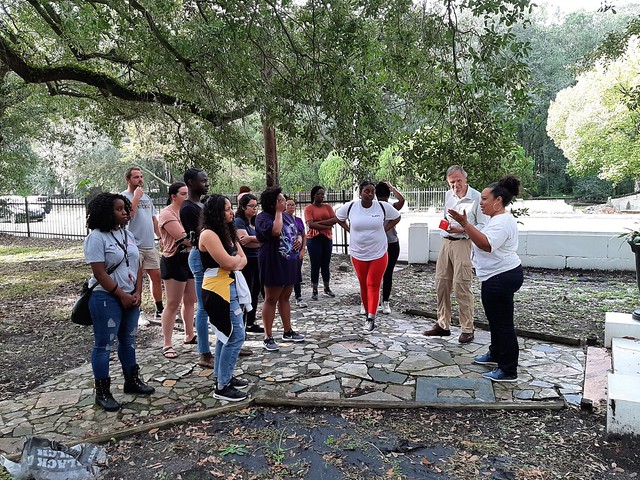 Africa is the beginning.

A young Wolof princess, Anta Madjiguene Ndiaye, born in present-day Senegal, was captured and sold into slavery. She soon found herself on an auction block in Havana, Cuba. The regality and beauty of the teen must have caught the eye of her middle-aged slaver, because Zephaniah Kingsley, a transplant from England, purchased, married, and installed Anta on his Amelia Island plantation, one of various that he owned in northeastern Florida. The year was approximately 1806.

This corner of the state had seen a confluence of cultures through the ages. The area had been indigenous Timucuan territory for thousands of years before the arrival of Europeans. French Huguenots and Spanish Catholics jockeyed for a foothold in the region resulting in the bloody expulsion in 1565 of the French by the Spanish under the leadership of Pedro Menéndez de Avilés, the same man who, that same year, would establish the Spanish colony of Saint Augustine—some forty years prior to the founding of Jamestown by the British.

Zephaniah Kingsley’s plantations in lands under the control of the Spanish Crown meant that laws governing slavery (and marriage with enslaved women) were favorable to the brand of slavery for which he advocated, a vision that did not abolish the institution, but rather, permitted mixed-race marriages alongside free persons of color, and mix-race offspring who could inherit property from their white fathers, a very different vision from the brand of slavery that existed in Anglo-influenced lands just a few miles north across the Florida-Georgia frontier. Kingsley granted his young wife, Anta (now Anna Kingsley), her freedom at the age of eighteen, and put her in full charge of the plantation’s operations during his trading travels away.

Interestingly, Kingsley also had common-law marriages with three other African women, a polygamous arrangement familiar to the culture and background of the women that he married, and one seemingly acceptable, or at least tolerated, under the Spanish system that governed his lands. Zephaniah Kingsley never entered into a marriage with a white woman.

A colossal changing tide occurred in 1821 when Florida moved from Spanish hands and became an extended territory of the United States. This change in guard not only put into conflict two different and contradictory forms of slavery, but most importantly, it jeopardized the unique African-based familial arrangement that Kingsley had created on his plantations and that worked in his favor under the Spanish World Order of things. Florida as U.S. territory (statehood occurred in 1845) meant that Kingsley’s wives and children would be returned to slavery…had they not moved to Haiti, another world of confounding crossroads and contradictions.

You will know them by their fruit.

Peri Frances has been our guide and griot since our very first pilgrimage to Amelia Island. She’s a guide for all of the obvious reasons: she knows the area well and has excellent local connections without which our Crossroads journey would be possible, but not at all the same. I call Peri our griot for less obvious reasons. In West Africa, a griot, also known by other names such as djeli, is a traveling storyteller who serves as a repository and transmitter of the oral traditions of a family lineage and of the wider community.

It so happens that Peri is also a direct descendant of Anna and Zephaniah Kingsley. Her great, great grandfather, Abraham Lincoln Lewis, Florida’s first African-American millionaire, married a Kingsley descendant: Mary Kingsley Sammis. The visionary A.L. Lewis was also the founder of the Afro-American Life Insurance Company in Jacksonville as well as of the historic American Beach, a community and vacation sanctuary for blacks during the height of racial segregation in United States.

Undoubtedly, visiting these sites is crucial to our Crossroads pilgrimage.

Our griot, Peri, has this extraordinary ability to tell the story of her ancestry with such vivid detail, description, and insight that you easily forget that the beautiful woman telling the story is the living breathing bloodline of all of the players contained within this unbelievable saga: Anna, Zephaniah, A.L. Lewis, down to her famous aunts—polar opposite sisters—the erudite former president of Spelman College, Dr. Johnetta B. Cole and the eccentric environmentalist guardian of American Beach, MaVynee Betsch, (aka “The Beachlady”).

Different from our previous Crossroads journeys, this one concluded at two Jacksonville gravesites. We completed service hours tidying up the cemetery where A.L. Lewis’ mausoleum is located, and just before hitting the road back home to Oglethorpe, we paid our respects at the unmarked grave of the Senegalese lodestar, Anta (Anna). An appropriate conclusion to our pilgrimage. In the African worldview, we are reminded that the ancestors are not dead, but rather, they are very much alive and influential in the realm of the living.

As I cranked the engine of the van, I saw through the side window Peri standing respectfully over the empty space believed to be where Anta Madjiguene Ndiaye’s bones are buried. I saw no tears, but a smile on the freckled face of the griot as a gentle breeze caressed it. I understood.

Dr. Mario A. Chandler is Professor of Spanish and a Crossroads Instructor at Oglethorpe University.