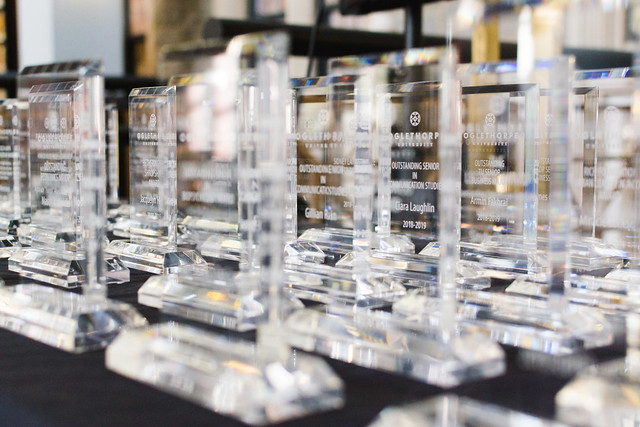 Oglethorpe’s annual Honors and Awards Ceremony celebrates the academic and leadership contributions of students, faculty, and staff throughout the academic year.

Congratulations to the 2019 honorees, who were recognized at the March 25th ceremony: Sullivan Awards are highly prized and have been won by people whose lives of service have changed the world with little fanfare, as well as those who have become household names. Recipients include First Lady Eleanor Roosevelt, television icon Fred Rogers, and Supreme Court Justice Lewis Powell.

Dr. Glenn Sharfman, provost and vice president for academic affairs, also recognized all students who were named to the Fall 2018 Dean’s List:

Congratulations to those Oglethorpe students whose academic performance during the 2018 fall semester merited recognition on the Dean’s Academic Honors List! This list celebrates the 364 students who achieved at least a 3.50 term grade-point average, while earning 12 or more semester hours.